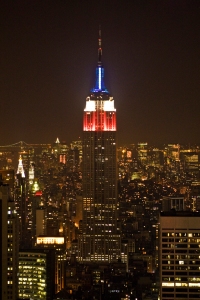 Mr. Donohue is incensed that the Empire State Building, a privately held property, will not light up the top of the building in brilliant red for the elevation of the Archbishop Dolan of New York to the esteemed rank of Cardinal.   Mr. Donohue, the mouth piece for the apologists of the Catholic Roman Collar Crime Syndicate in the United States, went on FOX News on February 26th to vent his frustration with the Empire State Building Executives who also had the audacity not to light the building up in blue for Mother Teresa’ birthday recently. Shocking!

The energy and outrage over this incredibly lame issue is almost as stupid as his attacks on victims of sexual abuse by priests.  Lets call a spade a spade here, Mr. Donohue is being a bully.  Of course, that is what he gets paid to do.

Mr. Donohue, perhaps if you would turn your organization’s energy and considerable resources to protecting children and vulnerable adults from predator priests or rooting out the hierarchy of the Catholic church who have given either passive or active approval to the continuing rape of children, people would be more amenable to lighting up the New York Skyline.

Mr. Donohue, it seems that your head is so far up your ass that you must be experiencing breathing problems and a lack of oxygen getting to your brain.  You have said on TV that the sexual abuse crisis is over.   Really!?  Perhaps they should light up Empire State Building in red light for all the Catholic priests indulging their sexual desires for children (boys and girls), vulnerable adults, prostitutes and seminarians.  You have stated publicly that a small number of priests (140?) are responsible for 25% of the cases of child sexual crimes committed against children by priests.   How many are responsible for the other 75%?  It seems to me that you have a lot of inside information on this.

Get your eye back on the ball, Mr. Donohue!