Rachel, who contributed the only guest post on this blog to date, made an interesting observation on the failure of the Bishop of Scranton to meet the goals for the Diocese Annual Appeal. This year, for the first time, the Diocese came up $274G short of this year’s goal of $5.3M. 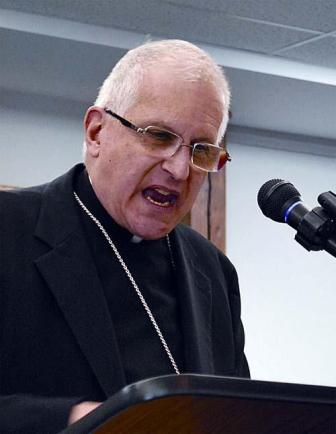 Since the Diocese usually meets the Annual Appeal goal, there is speculation on the reason for this year’s failure at attaining the $5.3M threshold of success. The Bishop was quick to point out the difficult financial times we are in as the reason for smaller pledges. Others insist that the shortfall was due to a protest that withheld funds because of the Bishops’ draconian way of doing business in the Diocese. The Bishop has raised the ire of some parishioners and other Northeast Pennsylvania residents by taking a hard line on a variety of social, religious and political issues. Bishop Martino has a reputation for raising the blood pressure of many of his detractors.  Some even may argue that the Diocese’s handling of pedophile priests and poor treatment of victims may have had an impact on the failure to achieve the donation goal.

From my vantage point down here in sunny Virginia, I see this all a little differently.  The Diocese claims that more individual donors contributed this year. While the number of donors may have increased, the dollar value of the pledges was lower than those in past years. I am not one for believing what comes out of Chancery in Scranton, but I will note that the Bishop seems to have achieved 94.9% of his goal. This feat is not too shabby considering the economic crisis gripping this country.  Had the economy not been in the sewer this year, one could reasonably assume that the Bully of Wyoming Avenue would have made the $5.3M.  If the 5.1% shortfall in this year’s Annual Drive was a protest, it was an anemic one, at best.

What I have a hard time believing is that the parishioners keep supporting this man despite his shortage of tact, diplomacy and an interesting inability to do the right thing.  While he does not come across as a “people person”, he was pretty successful in having parishioners open their checkbooks and almost fill the coffers of the church. If you examine the donations by parish, you will find parishes that greatly exceeded their goals while others barely made 24% of the mark set by the Diocese.

The people that get my blood pressure up here are the parishioners who are giving this Diocese money without a detailed accounting of where the cash is going.  The people continue to blindly give money to the holy mother church like lemmings heading over the cliff.  The bishop allegedly directed pastors to dig into parish accounts to cover the shortfall for their respective parishes and send the money to Scranton.  Take from the people to move the treasure to Scranton.  A little reverse Robin Hood action is what this looks like.  You would think that the Diocese would want the money pushed to the point where it was doing the greatest amount of good, at the parish level.  Nope, not this time.  It was time to render unto Caesar what was Caesar’s.

If the people of the Diocese have a real issue with this Bishop, they should cut him off financially and isolate him in his residence.  Had this year’s annual fund missed the mark by 10%, 15%, 25% I would have to acknowledge that the people have spoken and that the Vatican needed to call Joseph Martino to some higher purpose like what they did with Cardinal Law from Boston.  At least promote him to his level of incompetence (Cardinal Martino?). Alas, it seems that the shortfall in the Annual Appeal is not statistically significant enough to call a protest.

I see the failure here belonging to the loyal opposition within the ranks of the faithful of the Diocese to withhold more money.  A failure to understand the full spectrum of expenses that these funds are expended against. A failure to back up the demands that the Bishop come to the parishes and explain his actions/decisions and offer options, hope or his condolences on issues that are relevant in the Catholic Community in Northeastern Pennsylvania.  Instead he does what he normally does.  He sends a proxy or a letter.

To the parishioners of the Diocese of Scranton, I congratulate you.  You have the Bishop you deserve. As long as you support him financially, you are voting with your dollars to keep him.

This all leads me to my final thoughts on the fund-raising in the Diocese of Scranton.  In the most recent Catholic Light on page 15, there is a request for donations to support the Collection for the Care and Education of Priests. The ads for this fund-raising effort show priests that the drive is designed to support in getting medical care, educational opportunities and travel opportunities. The don’t show you the dark side of how this money will be used.

The Diocese does not tell you that funds raised in this drive are also going to support pedophile priests like Robert Gibson. Father Gibson and others like him who have been reported to the Diocese for sexually deviant behaviour with children and vulnerable adults.  Actions that would have sent most lay men to prison.  These men were placed by the Diocese in facilities outside of the reach of criminal authorities that have kept them safe from having to answer for crimes over many decades. They receive care and attention, in addition to quarters far better than that of the state prison system, where they should be living. In many cases they have cars and “off campus” privileges.  You can be sure that those privileges are being abused, along with children in the area where these “Catholic Facilities” are located.  Your hard-earned dollars will go to support these predators without consequence for the crimes they committed.

Support for these rapists is one of the ways your money is used. Bill Genello will refer to this as “other expenses for the medical care of priests, a matter of privacy”. If you want your money used to help the Bishop avoid scandal by hiding his rapist priests, you can stroke your check to the fund. Be sure to write in the words “Pedophile Support Fund” on the memo line of your check.

If you want to send your Bishop a message, stop the financial support, now! The only language they understand is the sound of the money spigot being turned off. Demand that they open the books and explain where all the money is going.