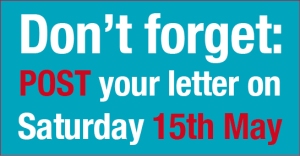 I have received some feedback on the campaign to reply to Pope Benedict XVI’s letter to the Irish people (Dear Mr. Ratzinger: Letters from Ireland, ). Some have enthusiastically embraced the idea and plan to write a note to the Pontiff to express their opinion of his prose to the Irish nation. Others think it is a bad idea because, in their opinion, it does not move the ball forward. Some initially embraced the idea and then had a change of heart. I respect all these positions and, believe me, I understand that, for some people, writing a letter to the Pope may only lead to frustration and despair.  I will not question the decision of any survivor to support or not participate in this campaign.

I am willing to write a letter for a couple of reasons. First, I think when voices, or in this case letters, are brought together they send a message. The message here is that the pastoral letter from the Pope was an exercise in deflecting responsibility for the sexual abuse crisis in the Catholic Church, specifically in Ireland and generally around the world. This is a method of protest to inform the Holy See that more affirmative and genuine action is needed to deal with the crisis worldwide.

I personally believe that writing a letter, expressing my concern, displeasure, and outrage at the Vatican policy of simply brushing this crisis off as a thing of the past will be cathartic for me.

That said, I have no illusions that the letters will get past some low-level Vatican bureaucrat working for some harried monsignor in the Holy See’s mail room. I have no illusions that anyone above the rank master altar boy at St. Peters will actually read my letter. I do not expect an answer from a Vatican official, Cardinal or the Big Guy himself. I will not be crushed two months from now when I have no overseas letter with some cool pontifical postage affixed. I am simply adding my humble missive to the universe of other letters that will be posted on 15 May in hopes that the numbers of letters arriving at the Vatican City Post Office are of a quantity large enough to merit a whisper in the halls that there is a lot of mail coming in and that people in Ireland and the rest of the world are tired of the Pope doing everything but the right thing in dealing with the sexual abuse crisis. Perhaps enough letters will arrive to warrant at least a sampling of letters to determine the sense of outrage over the Pope’s leadership deficit and the Holy See’s inability to grasp the magnitude of displeasure in the handling of these abuse cases.  Whatever happens, the act of writing and mailing the letter is enough for me (it seems oddly poetic that I will put my letter in the box at the Post Office on Battlefield Boulevard).

I can apply the same reasoning for mailing a letter to the Pope that I do to publishing a post on this blog.  I write it for myself. I am doing so to exorcise a demon, to be a voice for change and to help myself get to a point where I feel I have done what I can for myself.  If it is read by others, that is fine.  If it helps one other survivor deal with the “great terrible secret”, I consider that a major win.  If I educate someone along the way, all the better.

When I asked the leadership of SNAP to endorse the “Dear Mr. Ratzinger” campaign, the response I received was that it was not seen as a productive way to effectively communicate SNAP’s message or advance the cause of victims of clerical abuse. The SNAP leader who replied indicated that he , in concert with others, did not see how it could help, so they were going to pass on supporting the idea.  I was not surprised.  I am unsure about SNAP’s willingness to operate outside the comfort zone established by the organization’s leadership. They seemed to be committed to a model that is more restrictive in the types of actions that they will endorse or embrace.  I would think that they would support any effort, that was not harmful to survivors, to bring attention to the lack of a focused effort on the part of the Catholic Church to deal honestly with the sexual abuse crisis.  In the end, it is what works for the individual that matters to me.

For me, writing the letter is a good thing.  My voice joins with those of others, survivors and supporters alike, and sends a message that we are not standing idly by.  I am not trusting that those anointed by mortals are keeping the best interest of children and vulnerable adults at heart.  The hierarchy of the Catholic Church has failed us all, repeatedly, for generations.  I will not pass up an opportunity to voice that sentiment and send it into the world.  If it falls on deaf ears, so be it.  I will keep stirring the pot.

Calculate your postage for a letter to Vatican City at the U.S. Postal Service Website.

1 thought on “Posting the Pope not for everyone”