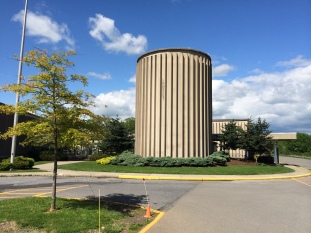 The last time I had gone to a reunion, the great terrible secret was still under wraps.   I had gone with 2 purposes, one of them was to find out if Gibson was still alive and destroying lives.  The second was to try to exorcise the memories of what had happened.   I was unsuccessful.

On the Saturday of Memorial Day weekend(2014)  I found myself pulling into East Stroudsburg, Pennsylvania.  It has been a while.  The last time I was in the area I was meeting with the District Attorney’s office in Monroe County to go over the events that occurred in 1973-1974.  After a one night stay, I left to return to my life in Virginia.

Now I was back.   My great terrible secret is no longer a secret.   Not long after arriving at my hotel and meeting up with a friend, I made the trip up the hill to see how the years had changed Notre Dame High School.  As it was the weekend, there was no activity on top of the hill.  Over the years I have discovered that people had nicknames for the round chapel building that looms  in front of the classroom building.  I had referred to it as “the Silo” for years.  Others have called it the “trash can” or the “pill bottle”.  The chapel contained within had been used, at least during my time at the school, for quiet  meditation, small masses, a quiet place to sneak off with a “significant” or “not so significant” other, or a place to get high.  For me it was the location of a couple of significant beatings from “Father” Robert Gibson to keep me in line.  One such beating was interrupted by Sister Beatrice, at least temporarily.  After looking around for a few minutes, I had my fill,  it was time to move on and see the rest of town.

Stroudsburg looked essentially the same.  Although the addition of a couple of hookah bars, a head shop or two and some empty store fronts were definitely not of the late 70’s, early 80’s vintage I remember.  Everything changes.  At least there is activity on Main street.  There are many small towns that can no longer boast of that.

The reunion was on Sunday at the Barley Creek Brewery in Tannersville near Camelback Mountain.   It was a perfect spot to have a gathering of about half of the class of 1978. While nervous about what kind of reaction I would get knowing that some of these people knew about what had happened, I had to walk up and see what would happen.   For the most part, the conversations that turned to the subject of Father Gibson were supportive. More than one person felt the need to tee up their own personal horror on the subject, which was fine.  I think that anyone who wanted to say something about the matter, did so.  If someone still has something to say, email me here.

A couple of the comments from people struck me.  Two different classmates wondered aloud about why the priests didn’t just have sex with each other.  Why did they go after children?  My response is that it was not about sex.  It was about power, control, dominance and ego.  Gibson took advantage of his position as a Pastor and a teacher to control his victims.  I don’t know if he was gay.  Frankly, I don’t care.   A gay priest does not necessarily equate to a pedophile predator.  No, all those years ago it was about control and terror.  It was about getting off on the knowledge that he could do what he wanted, when he wanted with the victims he groomed with little fear of consequence.  Besides, he had the Diocese of Scranton, Bishop Timlin in particular, there to cover his mess, move him to a new crop of victims and allow him to start over.  He had institutional backing.

There was no illusion of love or care.  There was only threats of retaliation and physical harm if the victim looked like they were going to tell someone about what he was doing.

I left the reunion feeling a little better.  I was not treated differently.  It was funny to me how quickly the social order reestablished itself in the group.   Even after 35+ years we fell in with those we survived high school with.  Although this time, the illusion of  the masks we hid behind in the school on the hill seemed to be a little less visible.  Will I go back to another reunion?  I am not sure.  There has been a lot of water passed under the bridges I had burned all those years ago.   I am grateful that I saw as many old friends as I did.   A note for the people who were on the same page as me in the yearbook, thanks for your support.  I had heard from all three in the years after my revelation.  You are all gentlemen and I proud to still have you as friends.  For the three women who were also very supportive over the years (all three were at dinner after the reunion), I wanted to thank you as well. You all have helped me understand that I was not at fault for what happened all those years ago.  There were some pretty amazing people in that class.

For the matriarch of “the family”, I can never hope to repay you for all you have done for me since the first day of 8th grade.   My world would have been completely and tragically different without your support, friendship and wisdom.  You had a profound influence on a lot of lives and I think it is time you understood that.  I know I am not the only one who has let you know that recently.