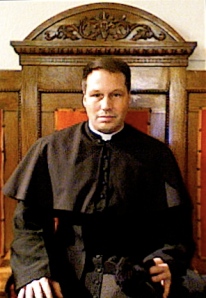 Virgil Tetherow, Brad Tetherow, Father Gabriel, Mr. Oregon,whatever you want to call the convicted child porn connoisseur who is currently masquerading as a Catholic Priest at a schismatic “Roman Catholic Mission” in York, continues to enjoy the favor of a fringe group of misguided ultra conservative Catholics. One sent in a comment to an old post on this blog that is just too good to relegate to the obscurity of a comment on a post that is only read occasionally by those searching for information on the priest removed from ministry by the Diocese of Scranton.  His removal facilitated  after he pleaded guilty to charges related to the discovery of child pornography on church computers at St. Ann’s Parish.

The comment posted last night by someone using the name “Devoted Catholic” (mailto:fraeuli@gmail.com) goes as follows:  (I am not editing this submission, I am adding emphasis in the form of bolding where I found the writer’s comments particularly interesting.)

Before anyone goes ahead and sends that email to good Mr. Romeo, who knows Father and knows what was done to Father, take a moment to think about this. You read this web page which instructed you on what to think, feeding you a one-sided view of the situation. You were then told to email Mr. Romeo about what you think, or rather what you were just taught to think. Father was framed, and is willing to discuss the matter with any honest person who approaches him about it. The best priests are the ones who suffer the worst persecution by people who would like to stop them from serving God in such a holy way, people who put filthy images on their computers and whatnot. Think, someone could do that to you too. Get to know Father and you will see that he is simply too holy and too paternal of a priest to harm any of God’s children. It is the modernist priests who distribute communion to abortionists, active homosexuals, and adulterers whom you should be worried about letting your children be around. The scandalous modernist priest filth has to stop, and so does the one-sided gossip about good priests like Father by people who don’t even know him.

“Father was Framed!”  Stop the presses…  “Devoted Catholic”,   despite your protestations to the contrary, a guilty plea to charges related to child pornography in court is not “gossip”.  The fact that your “Mission” has a history of hiring disgraced priests with a penchant for sexual activity that involves children, either real children or photos of real children in inappropriate sexual positions is a fact.  Chairman Dave, Mr Romeo, D.W. Drew, Devoted Catholic and Father Gabe,( Gabriel, Bradley, Virgil, Mr. Oregon, whatever his manufactured name is this month) all know that this is not gossip, it is documented fact.  The gossip comes in when these low- life pedophile apologists start blaming the Diocese of Scranton (an organization that I particularly loathe) and the pastor of St. Ann’s at the time of “Father Gabby’s” conviction for the admitted offenses of this creepy priest.  (If you haven’t seen his Classmates.com photo and self aggrandizing write-up including his claims of publishing a book and being the pastor of a “Catholic Church” you should take a look to see the face of deceit).   I will  assume that the “best priests” try to keep their minds and hands out of children’s pants.

You claim that Father (oh, just pick a name) is willing to talk about how he was framed.  I am all ears.  I have stated in the past that I would be more than happy to give him a forum to clear his name if he had exculpatory evidence that would prove his claim.  If you can prove that the Diocese of Scranton conspired as part of a criminal enterprise to “frame” Father, bring it on, or let me send it to an investigative reporter with whom I am acquainted and let’s start the process of clearing his name right now.   The expected response from “Devoted Catholic” is that I don’t qualify as an “honest person” in the eyes of the Catholic Mission in York.  Alas, Chairman Dave and the rest of the “Ultimate Providers” in York remain entrenched in their fantasy world where all the problems in society have been caused by Vatican II, “modernist priests giving communion to abortionists, active homosexuals and adulterists” and liberals.  Jeeze, these guys are starting to sound more like a hybrid of the Westboro Baptist Church and a Michigan Militia.

Devoted Catholic, you have no idea what is in the heart of the man who was ordered to stop presenting himself as a Catholic Priest.  Your blind devotion to this convicted deviant is a testament to your inability to look at documented evidence, to include Tetherow’s guilty plea, and see that this man is not too holy and too paternal to get aroused by looking at photos of naked little children.  Go ahead and drink the Kool-Aid, bask in your obvious and pathetic ignorance and go on believing what you are told by Chairman Dave and Father “Kiddie Porn”.   You seem to be made for each other.  To the parents of York, Pennsylvania, you have a predator wearing clerical garb in your city.  BEWARE!  To the members of the Mission Cult in York Pennsylvania, if you want to keep bringing this up, I am more than willing to focus the spotlight on your self proclaimed “pastor”.

More posts on Father Tetherow can be found here:

Father Gabriel, Former Mr. Oregon?
A Few Last Thoughts on the Chairman of Sts Peter and Paul Mission’s Hateful Letters and Articles
Hey, I’m a Psyco-Blogger
Letters, we get letters…
The Friend of My Enemy is My Enemy
More information on Father Tetherow and his troubles at St Ann’s can be found at:

1 thought on “Another York Cult Member Writes In…”